We found them laying still in Southern Utah, their sides flattening with age. What had caused them to spew out the black rock that we found scattered across the red sandstone of Zions National Park? Volcanos are also found in South America. How have forces that created these volcanos affected the entire North and South American continent and are they still likely to change our lives?

The US National Park Service ran a 30 min video on the geology of Southern Utah. The area had once been an equatorial sea, millions of years ago.  The shifting of the tectonic plates – the large pieces that float atop the earth’s molten core are not as stable as they feel.  Some areas of the planet are actually sinking deep into the mantle, where they are heated and turned to molten rock.

These tectonic plates may slide beneath each other, the one lifting the up, like wedges under a board, as is the case of the Nazca plate.  Along the west coast of South America, the Nazca plate is moving under the South American Plate. This movement has forced up the beautiful Andes mountains, and had led to continued earthquakes and a string of volcanoes.  In geological time, these things happen fairly quickly, with the volcanoes in Peru being most active in the last 40 – 60 million years.

The subduction of the Nazca plate under the South American plate also causes the “Peru – Chile trench” which stretches along the coast.  It is an area of deeper ocean and, as a result, one of the richest fisheries in the world.

The same forces that are driving the Nazca plate are still at work, moving the continents around, causing them to uplift, to subduct and also sheering them apart.  These fault lines are often the areas where the greatest number of geological events take place.  Looking around Utah, it is clear that geological events have played a role in shaping the landscape.

The red sandstone deposited from ancient seas is draped with a mantle of dark igneous rock from the lava flows.  The volcanoes still stand, though less majestically as testament to the forces of nature that have changed the land on which we live for millions of years.  From this diagram we can see that North and South America are being torn apart from each other, as North America moves toward the East and as South America is pushed Westward by the Nazca plate.

These forces of incredible magnitude lead to some spectacular scenery.  In Peru, the Valley of Volcanoes is famous for it’s amazing beauty.  Near Andagua-Orcopampa, there is a ring of volcanoes.  It is called the ‘volcanoes playground’. According to “Living in Peru” here you can see “Mount Coropuna (6,425 meters), the highest volcano in Peru, and Solimana (6,323 meters), a solid summit of rock and ice from where one can spot the distant Pacific Ocean more than 200 km away.”

It is part of a volcanic arc (see above) that includes the mountains of Ampato–Sabancaya–Hualca Hualca, Chachani, and El Misti.  There is fear because of the ice caps that grow and recede atop Coropuna, that any geological event – earthquake, mudslide or volcano could cause a great deal of destruction.  Coropuna has the second largest equatorial ice cap in the world.

In Peru, many of the volcanos have stories and are considered powerful earth beings, often called apus. In Cusco, the volcano Quimsachata erupted last some 6,000 years ago and before that 11,000 years in the past.  The Incas erected a temple to the great god Wiracocha near it, in the present day town of Raqchi, and the eruption is remembered in a story. The god came visiting as a man and people did not treat him well so he destroyed them with fire. The blackened rock of the lava flow commemorates this event.

The smoke above Utah’s volcanoes lofts peaks has dissipated and they begin to slump back into the earth.  The motion that brings forth the living lava from the depths of the earth affects both Utah and Peru.  The earth trembles in both places as the earth moves under our feet.

The Sheraton Hotel under Construction in Cusco Raises Indignation

Pride and Emotion in today’s Civic and Military Parades 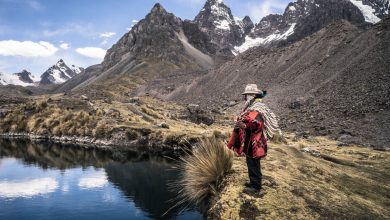 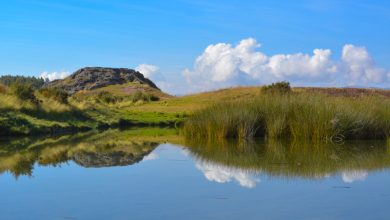 Cusco: Places of peace and tranquility