The people of Cusco feel indignant that the Hotel Sheraton’s construction goes forward, especially since it was rejected by the city and its government as a means of protecting the status and quality of the Cusco. The city is considered a UNESCO Human Heritage site at the same time its streets in its colonial core are considered historic patrimony of the city.

The citizens who live near Saphi Street came out many times to march through the streets and plazas of the city.  They denounced in loud voices, and with placards, to the rhythm of whistles and drums the violation of Cultural Heritage that the Hotel Sheraton is committing.

These marches raised the consciousness of a great majority of the city`s population about the license granted it under the last government, that of Luis Flores Ochoa, in December of 2014.

The current administration, led by Mayor Carlos Moscoso Perea, seeks to annul the license given to the builder, R&G S.A.C., to build the hotel. To this is added a civil denunciation by the Regional Directorate of the Ministry of Culture who claim it is an attack on archeological monuments and involved falsifying documents.

From the center of Cusco’s Plaza de Armas, you can see the growth of the erroneous construction. It already has seven floors and in the Colonial Core a maximum of two are permitted since more would break the line of the colonial city and would damage the city’s status as Human Cultural Heritage. 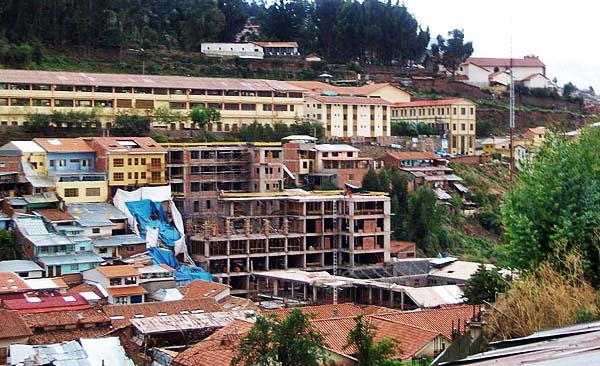 This building causes concern since it may lead to the negative consequence that Cusco could lose its standing a Human Cultural Heritage given by UNESCO.

This theme leads to much indignation in the citizenship.  Everyone asks for the city to be protected and its patrimony to be intact.  Now the problem is not only a municipal one but involves the Peruvian state.

Food in the Fiesta of the Virgin of Carmen