â€œThere were giants in the earth in those days.â€ (Genesis 6:4)

Giants course down Cusco streets these days in the midst of hordes of followers and make me think. Their presence overwhelms; they are dramatic and imposing, and obviously an important part of life in the city even it it is only at this time that they parade in such numbers.

Right now, as I write, the giants, or better said, the Holy Patrons, the saints, from Cuscoâ€™s traditional neighborhoods are gathered in the Cathedral in their annual convocation. Tomorrow, the eighth day of Corpus they will begin to make their way back to their home chapels, some quick and some slow, each with a different velocity and a different path. They will tower over the city and block traffic for days, along with their followers who march with them and often dance.

Besides them, there were also giants who rose like massive pillars and danced up the Sun Avenue and around the Plaza de Armas this last Sunday when the Diego Quispe Tito University of Fine Arts carried out its annual parade of allegories, as the giants are called. Crowds jam packed every available inch of space to watch the parade of giant allegorical figures. They laugh and point, smile and howl. The figures still stand in the mall and on Marquez street where people stop to look, comment, and admire.

This doubled set of giants makes its way out of enclosed spaces and into the streets of Cuzco every year in close proximity, the feast of Corpus Christi and during the civic parades of the Fiestas del Cusco. They overwhelm in size and majesty, and in the numbers of people who accompany them, more for the holy patrons and less for the allegories. It stuns to see them, larger than life and too large at points to easily make their way under the wires that cross some streets. The scale of the ordinary feels tiny and easily overwhelmed by beings much bigger and hence transcendent.

These twin sets of giants are an important part of Cuscoâ€™s social organization. If you only focus on the people and miss the power of these entrances and their role within the lives and actions of the people, you miss understanding the city.

The allegories vary every year, according to the decisions of the various teachers and groups of students of the unique school of Fine Arts. They exercise their craft and their art to bring aspects of Peruvian, and particularly Cuscoâ€™s social, economic, and political life into being through images that for the day of the parade will live and move, almost breathe, among the crowds.

They are never the same, although there are common motifsâ€”critique of the US and of the villainy of some national presidents not well liked in Cusco. Otherwise, you can expect the realizationâ€”the making tangible and realâ€”of national political and social scandals, such as the current crisis over the milk company Gloria who was discovered adulterating milk products, or the wound from Chileâ€™s denying the word pisco to Peruâ€™s fine liquor.

In taking abstract and fluid issues and bringing them to ground, making real, in images we see part of the role and ongoing purpose of art. It encapsulates and condenses in ways that otherwise would be unseen. However, here it is also giant. That is, it moves in the space of the holy, that which is otherwise occupied by the saints.

The fifteen holy patrons who parade in Corpus Christi, stay the same in the medium run, are well defined by a history of artistry and iconography, which should never be sold short, as Cusco has engaged with Europe and created its sacred figures that stand between worlds. They bridge the heavens and the earth, as well as the continent of the invaders, imperialists and the land of the Incas. Cusco has been famous for its religious art and its image makers, whether they are doing holy art, regular art, or handicraft. The presence of these artists was an important justification and support for creating the school of fine arts, named for one of the finest of Cuscoâ€™s classical artists, Diego Quispe Tito.

Every year, the clothes of the saints are different. They are ordered made by the people who sponsor the saintâ€™s feast on this occasion and represent the wealth and power of the sacrifice and gift these people make in devotion to the holy figure. They also are important for their power of organization in bringing together groups of followers who, in their sacrifices and movements, make the saints come to life and even dance in the streets in all their giant-ness.

In this, we see a difference between the two sets of giants. Though joined in relationship to transcendence and even to the sacred, they are separated in relationship to society. The saints cause the traditional neighborhoods and social groups, brotherhoods and such, to be motivated and come alive in activity around and for the benefit of the holy figure, which is reciprocated when the figure dances in greatness through the streets.

The allegories also invoke groups of people, but these do not then turn into social activity and organization around the figures. Their togetherness is momentary, although still powerful. It is that modern art of the state and the politics of invoking groups who spectate and find identity and self in that act. Their emotions and feelings are invoked, but without more action they do not form into active blocks, even though this is the model of contemporary political leadership manifested in the one ritual act that is semi obliged, the vote.

I see the twin sets of giants that condescend to appear and dance through the streets of Cusco as giving access to twin sets of ideal holiness in Cusco with their different forms: social organization, one of parishes, neighborhoods and brotherhoods, the other of spectators and identity as a focus of self on some external object greater than life.

In these figures, and their size, we see the magic of Cusco. It is indeed a powerful entity and its giants show it and give it form.

My Experience as a Dance Instructor

It is the Octave of Corpus and People Eat Chiriuchu 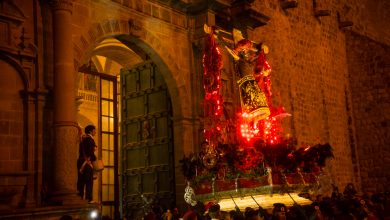